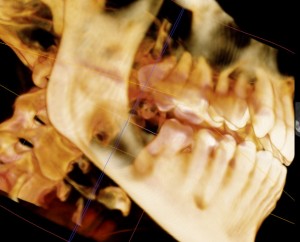 A patient came to me after her dentist discovered a developing jaw cyst associated with her impacted wisdom tooth. For years, she was told by her previous dentists that there is nothing wrong with her wisdom teeth and there were no reasons to remove them. One of the dentists even noticed the cyst in its early phase and told her it’s not a problem. A year later the cyst had grown significantly, destroying almost half of her jaw bone and shifting the impacted tooth even deeper. The surgery that would have been a conventional removal of an impacted wisdom tooth, now requires extraction of a deeply impacted tooth, excision of a cyst, bone graft, and potential disturbance to a sensory nerve that sits in close proximity to the cyst.

This is not an isolated example. We see similar stories such as this almost monthly. While jaw cysts are relatively less common than infections, they lead to more serious complications and destruction of the jaw bone and its surrounding structures. Treatment becomes more risky, more invasive, with longer recovery, and certainly more expensive.

Both dental professionals and patients should take impacted wisdom teeth more seriously and follow evidence-based recommendations before complications occur. In my book, The Wise Guide To Wisdom Teeth Extraction, I review the rational for the early removal of all four wisdom teeth during teenage years. The surgical risk in minimal and the recovery is quick with less treatment time and cost. If decision is made not to remove the wisdom teeth early on, then they should be closely monitored. At the earliest sign of a developing cyst or other forms of pathology, patient should seek care from an oral surgeon and treat it before it becomes more serious.