This master class will review a step by step process of arriving at the correct pulpal and periapical status of the teeth. As well as outlining the most reliable clinical testing methods, the evolution of imaging will be discussed. Also, the role of the CBCT in Endodontic imaging will be highlighted.
Course Objectives: 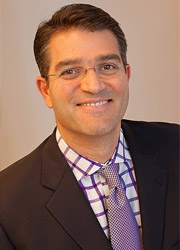 Dr. Zia is a Diplomate of the American Board of Endodontics. To obtain board certification he has completed an extensive set of examinations and interviews designed to test exceptional knowledge, skill and expertise in the specialty of endodontics. Currently, only 19% of endodontists practicing in the U.S. have attained diplomatic status.
Dr. Zia is an active member of the American Association of Endodontists, the American Dental Association, and the DC Dental Society. He is the 2001 recipient of the District of Columbia Dental Society’s David Mast Memorial Award for excellence in continuing education. He was voted one of Washington’s “Top Dentists” in a survey of his peers conducted by Washingtonian magazine and was voted among “America’s top dentists” in a similar national survey. He is a Fellow of the International College of Dentistry, which is dedicated to advancing the science and art of dentistry worldwide.

Dr. Zia resides in Washington, DC with his wife and two sons.

Register for this Course