This patient presented with history of pain and swelling associated with his upper right molar which had been previously treated with root canal. The tooth had a large abscess and recurrent decay under the crown. The tooth was non-restorable and required extraction. Patient wanted to replace the tooth with an implant at later time. 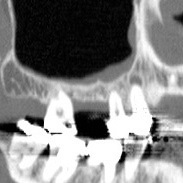 The tooth was initially extracted under IV sedation and the abscess was cleaned. After 3 months of healing, a CT scan was done to assess the healing and available height of bone. Because of sinus proximity and remodeling that often occurs after a tooth extraction, the height of bone decreased during its healing. There was about 5 millimeters height of bone, which was inadequate for support of a proper length dental implant. Short implants fail frequently in this area and therefore are not recommended. A single dental implant was placed with bone augmentation at the same time (known as single stage surgery). The implant and grafting surgery was performed in the office under IV sedation in just under 45 minutes. After 6 months of healing the implant was prepared for impression and placement of the final crown by the restorative dentist. The final crown was then placed on a custom abutment. The implant and graft remain healthy and strong and the patient has regained his natural bite and is able to chew normal food.