Presented by Dr. Steven Sullivan, DDS, Professor and Chair, University of Oklahoma at the AAOMS Dental Implant conference In December, 2009)

Summary: Mini implants, often offered by less experienced dentists as a quick and less costly solution to replacing missing teeth, have a high degree of complications and failure and therefore are not recommended for long-term tooth replacement. Only standard size implants should be used for teeth replacement to achieve long-term success and longevity.

Small diameter implants have very limited clinical use and currently are only approved as a transitional implant for mandibular dentures. The claims by companies that have basically targeted general dentists are not supported in well designed studies, and there is no dependable evidence-based data in the literature. They have high rates of failure, and very limited in their clinical use, and do not provide patients with the results they expect. The companies do not seem to support such studies and have not been collaborating with the scientific community.

It is recommended that patients only have standard size implants for replacement of missing teeth with long term prognosis.

Mini implants are thin implants that have gained some popularity because of their simplicity and low cost. However, they are associated with many complications mainly because of misuse. The general rational for development of small diameter implants was the simplicity of insertion, cost effectiveness, and clinical effectiveness. The mini implant market share has increased greatly from $14 million in 2005 to over $55 million in 2010. They are mainly purchased and placed by general dentists (who are the main target market) and very small number of specialists. They have been sold to over 18,000 dentists globally.

Currently, mini implants are FDA approved only as a transitional implant for mandibular denture stabilization. Off-label use has been utilized by some clinicians but there is no data or evidence-based support for their use and they are not considered the standard of care. This has resulted in legal implications. 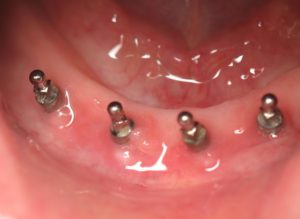 Mini implants may be offered to you elsewhere because they are cheaper and easier to place than regular implants. However, mini implants are rarely successful in the long term and are associated with many complications such as infection or fractures.