The patient came to us complaining of his short chin appearance. He was very conscious about his looks and felt that the chin was just off balance. He wanted to have a stronger and more ‘male’ chin and improve his appearance.

His lower jaw and bite were normal, so the only deficiency was in his chin which was underdeveloped. For him, an anatomic chin implant was placed through a small incision under the chin. The implant comes in different shapes and sizes. Because of his request, a chin implant was selected that provided a ‘male’ square shape to his chin. He was very happy with the result as it gave him a stronger chin while being very natural in appearance. 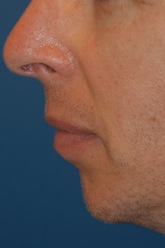